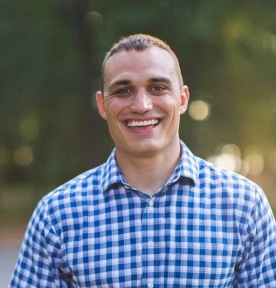 The Lord called Jared to be the Senior Pastor of Plainfield Baptist Church in April of 2017.

Jared was born in New Orleans, LA and raised in Spartanburg, SC. In God’s kindness, He saved Jared from his sins at a young age by the gospel of Jesus Christ through the faithful witness of his parents and local church.

Jared attended the Southern Baptist Theological Seminary in Louisville, KY where he graduated with a Master of Divinity degree.  He is also a veteran of the United States Marine Corps Reserve. Jared and his wife Anna Leigh are the parents of four little boys and proud owners of the cleanest minivan in Indiana.

Deven grew up in East Tennessee. From the time he was a young child he heard the Gospel of Jesus Christ on a regular basis. Around the age of 11, he began trusting in Christ as His Savior.

For 5 years Deven served as a Student Pastor in a church North of Atlanta. In May 2013, the Smiths moved to Louisville, KY where Deven began working on a Master of Divinity from The Southern Baptist Theological Seminary. Also while in Louisville, Deven was a Pastoral Intern at Clifton Baptist Church in 2016-2017. In February of 2018, he began serving as the Pastor of Discipleship and Family Ministry at PBC.

God has graciously blessed he and his wife, Leah, with four children. Their burden is that each of them would grow up to know and love the Lord Jesus Christ.